A brief guide to fflecsi 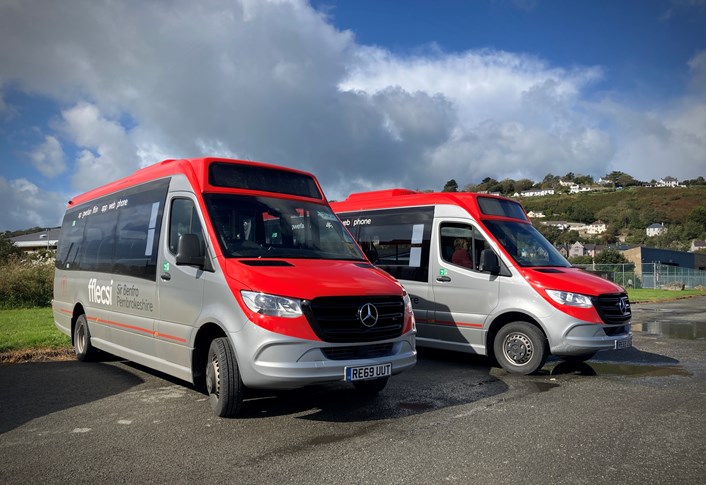 Since we launched fflecsi in June 2020, over 100,000 journeys have been made on our pilot services in Wales. We’re now providing an average of 4,000 rides every week, across eleven different areas throughout the country.

Here is a brief guide to our demand-responsive service, and some of the places you can catch a fflecsi service in Wales.

fflecsi is a new kind of local bus service. Instead of picking up and dropping off passengers at a bus stop like a traditional bus service, fflecsi buses pick up and drop off within a service area. In most cases, there is no fixed timetable, as buses pick you up at your request, changing route so that everyone can get to where they need to go.

Powered by technology from ViaVan, the demand-responsive approach means fflecsi services can be very flexible. Knowing how many passengers we’re picking up means we can guarantee everyone a seat and being able to change the route based on where passengers want to travel means fflecsi can get you to where you want to be when you want to be there, in a more sustainable way.

You can book onto a fflecsi service via the smartphone app or by calling the fflecsi team on 0300 234 0300 – our helpline is available 6am-11pm Monday-Saturday, and 9am-7pm on Sundays. You can find out more on the fflecsi website: https://fflecsi.wales.

Where is fflecsi running?

We’re currently trialling fflecsi in 11 areas across Wales. We’re working with local authorities and local bus operators to deliver services and considering potential new developments in the future – so keep a look out for a service coming near you! Zone 1 of the Blaenau Gwent fflecsi scheme operated by Stagecoach covers the town of Ebbw Vale, as well as surrounding villages including Beaufort, Rassau and Garnlydan and the Rassau Industrial Estate. The service helps you get to work, to shopping in Ebbw Vale town centre, or for onward travel – connections include TfW rail services, the X4 bus to Cardiff, and bus services to Abergavenny.

Zone 2 covers the Ebbw Fach valley, running from Aberbeeg to Ebbw Vale via Abertillery, Blaina, Nantyglo and Brynmawr. This service is also designed to link in with TfW rail services between Ebbw Vale and Cardiff at Llanhilleth.

We’re working in partnership with Carmarthenshire, Pembrokeshire and Ceredigion County Councils to enhance the very popular Bwcabus service which celebrated 12 years of operation this autumn. fflecsi Bwcabus is divided into two services across West Wales, providing a vital link for rural communities.

The first of these covers rural north Carmarthenshire and south Ceredigion, including the university town of Lampeter, the settlements of Llanybydder, Llandysul and Newcastle Emlyn, and attractions such as the Teifi Valley Railway, Cenarth Falls and the Dolaucothi Gold Mines. The service connects with local bus routes, as well as the TrawsCymru T1, T1C and T5 long-distance bus routes. The second is located in Pembrokeshire, serving villages to the south of the Pembrokeshire Coast National Park. This connects in with the TrawsCymru T5 and T11 services.

The north Cardiff fflecsi service, operated in partnership with Adventure Travel, covers many of the capital city’s north-western suburbs. Starting at Gwaelod-y-garth in the shadow of the Garth – inspiration for the novel and film The Englishman who Went up a Hill but Came down a Mountain – the service area follows the River Taff south, covering areas such as Tongwynlais, Coryton, Llandaff North and Whitchurch before ending at the A48 in Gabalfa.

The service provides interchange with TfW rail services at Llandaf and Coryton and connects with other bus services in the area. It also provides links to work and leisure opportunities, shops, and health facilities, serving the University Hospital of Wales in Heath, Velindre Hospital in Whitchurch, and Forest Farm Country Park and Industrial Estate. fflecsi operates in the scenic Conwy Valley, covering the rural area centred on the town of Llanrwst. The scheme stretches into Snowdonia National Park, making it ideal for tourists exploring some of the region’s landmarks and attractions, including Zip World Fforest and the popular village of Betws-y-Coed.

However, it also plays an important role in journeys for local residents in the many villages covered within the service area, and connects with Conwy Valley rail services, as well as the TrawsCymru T10 (Bangor-Corwen) and T19 (Llandudno-Blaenau Ffestiniog) bus services. On Tuesdays, Fridays and Saturdays, the service area extends to run along the A5 to Corwen, as well as villages in the area of Llyn Brenig, a popular location for watersports and an osprey breeding site.

fflecsi is also available in the historic town of Denbigh. The service area covers the entire town, including the town centre shops, and also the nearby village of Henllan to the north-east. The service is operated by M&H Coaches.

Famed for the centuries-old St Winefride’s Well, Holywell is now the focal point for the Flintshire fflecsi service. The service area includes the villages of Caerwys, Afonwen and Nannerch to the south, and the nearby coastal village of Greenfield.

The Llŷn Peninsula is one of the most scenic parts of Wales, being designated as an Area of Outstanding Natural Beauty, and has many small tight-knit local communities nestled within the spectacular hills. The O Ddrws i Ddrws fflecsi bus service provides a service that is useful for local residents and tourists alike.

The area covered by the fflecsi service stretches from the coastal town of Pwllheli – where it meets the railway station at the end of the Cambrian Coast Line – and the village of Trefor on the north coast through to the western tip of the peninsula, including the villages of Abersoch, Aberdaron and Nefyn, as well as the scenic fishing village and popular filming location of Porthdinllaen.  This is a seasonal service operating between April and October. As the location for the launch of the first pilot service, Newport has formed a key part of fflecsi since May 2020, and the service area within the city has recently undergone a major expansion. You can now book a fflecsi service in most of Newport’s residential areas, and the service operates from 06:00 to 23:00 Mondays to Saturdays and 09:00 to 19:00 on Sundays. This runs alongside scheduled Newport Bus services in the city, and the fflecsi app recommends whether a scheduled service or a fflecsi service is a better option for your journey.

The service covers all the city’s landmarks and attractions, including the Transporter Bridge, Friars Walk Shopping Centre, the Celtic Manor Resort, the International Convention Centre, and the Roman amphitheatre in Caerleon, as well as Royal Gwent, St Woolo’s and St Cadoc’s Hospitals. It also provides connections with rail services at Newport, Pye Corner and Rogerstone stations, as well as numerous local and regional bus services.

The Pembrokeshire fflecsi scheme differs from other areas as it operates to a demand-responsive model based around flexible routes. This covers three zones running through scenic West Wales. The St Brides Zone connects St Davids, the UK’s smallest city, and the rest of St Brides Bay including the villages of Solva and Newgale with the town of Haverfordwest. The St Aidans Zone covers the same settlements on the St Davids Peninsular with the harbour town of Fishguard, while Jemima’s Zone – named after legendary local heroine Jemima Nicholas – covers the area between Fishguard and Haverfordwest, roughly following the A40.

As with other schemes, the zones are designed to serve shops, services and activities, particularly in the towns of Fishguard and Haverfordwest and throughout the Pembrokeshire Coast National Park. Attractions include the Last Invasion tapestry in Fishguard, Scolton Manor Country, and the world-famous cathedral in St Davids. Services also connect with the TfW railway stations at Haverfordwest and Fishguard & Goodwick.

This fflecsi service operated in partnership with Townlynx covers the entire seaside town of Prestatyn, stretching from Ffrith Beach in the west to Prestatyn Golf Club in the east and the village of Meliden in the south. This includes interchange with rail services at Prestatyn station, and also provides access to the Prestatyn-Dyserth Way, a popular active travel route along a former railway line, which we covered in a previous blog article. 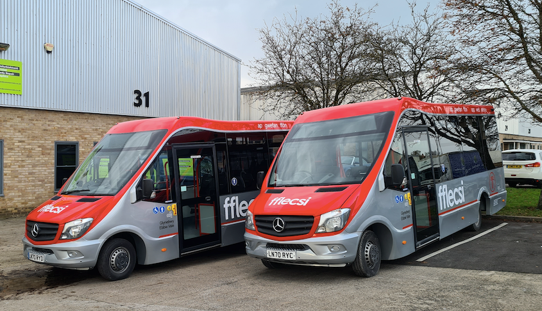 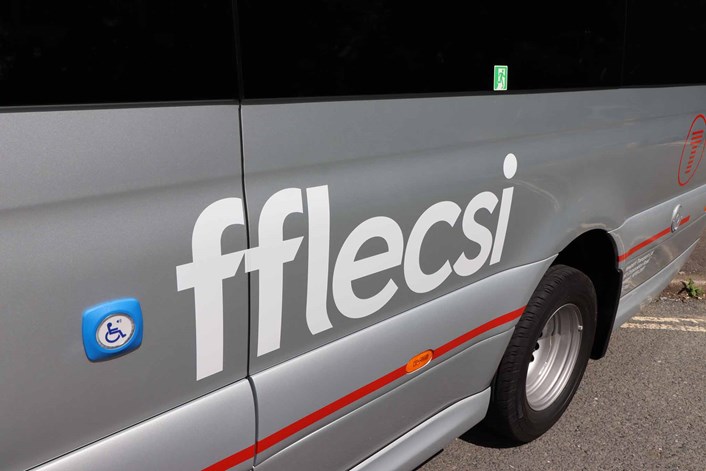 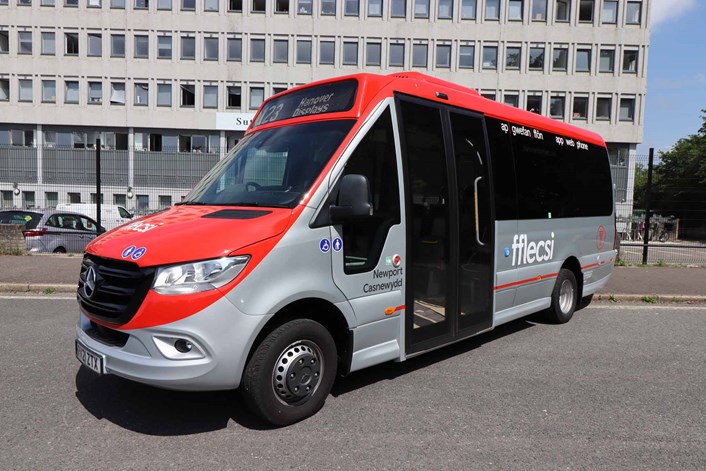 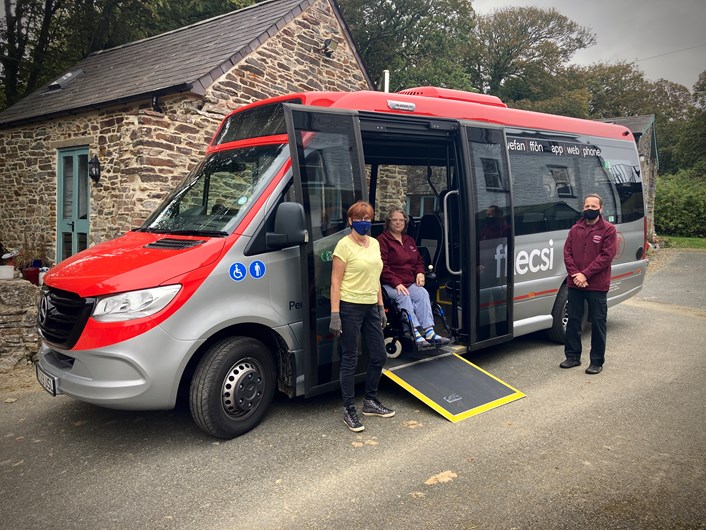