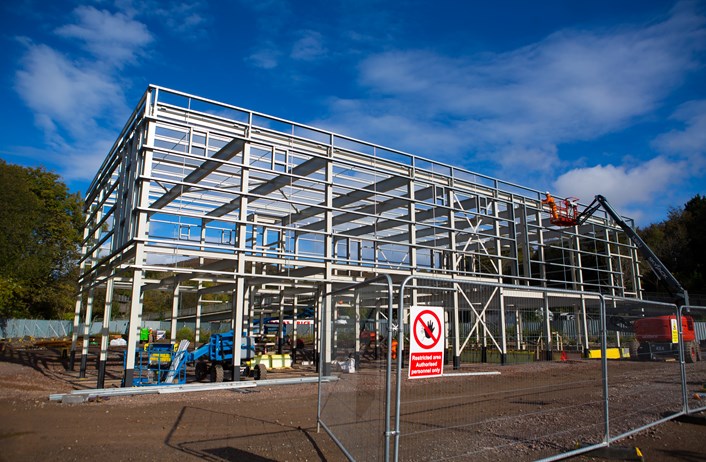 Transport for Wales continues to move forward with South Wales Metro developments and has recently erected the steel frame for the new Control Centre at Taff's Well.

Transport for Wales continues to move forward with South Wales Metro developments and has recently erected the steel frame for the new Control Centre at Taff's Well.

The Control Centre will oversee Metro operations including signalling and train movements and will be a vital part of the £100 million Taff's Well Metro Depot.

There will also be a modern maintenance facility built to service and home brand-new Metro vehicles (tram-trains).

On completion, the Control Centre will control the Core Valleys Lines, which TfW took responsibility for earlier this year.  It will use the latest Traffic Management System (TMS), combining operations and infrastructure control with driver and passenger information.

“Metro systems in the north and south of Wales is part of our ambition for a modern transport network that makes it easier for people to travel without using a car.

“Part of the reason we took the decision to exert more public control over our railway was to safeguard the plans for these ambitious Metro schemes. I therefore welcome the continued progress in Taff's Well.”

“Our £100 million Metro Depot at Taff's Well is a major part of the South Wales Metro project and it’s great to see the steel frame going up for our future Control Centre.

“In the future, this Depot will operate the South Wales Metro and will be home to approximately 500 staff and we’re proud to be continuing with the delivery of our plans and achieving key milestones.”

“I’d like to thank our Infrastructure Development Partner, Alun Griffiths and their sub-contractors for all their continued hard work on the Depot.”