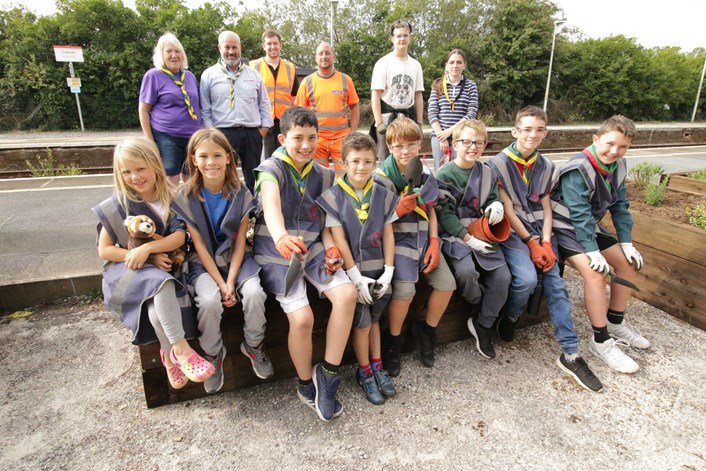 Our largest green transformation yet has been completed at Kidwelly railway station.

Our largest green transformation yet has been completed at Kidwelly railway station.

Transport for Wales (TfW) and volunteers from Centregreat worked together to build six large, raised beds in the station, creating a new green space for biodiversity to flourish. The station has been adopted by the Kidwelly Scouts Group, who’ve helped us plant pollinator-friendly flowers.

The Kidwelly Scouts Group will continue to support the station through TfW’s Adopt a Station scheme, building on their work to maintain and enhance the station environment.

Natalie Rees, Head of Sustainability and Climate Change for Transport for Wales said, “We’re dedicated to improving opportunities for biodiversity enhancement on our network. By working with community groups like Kidwelly Scouts and our industry partners at Centregreat we can create community-owned enhancements, driven by the people we serve.

Projects like Green Routes are great because they contribute in various ways, from boosting biodiversity, enhancing our customer experience at stations to building relationships with our communities and neighbours.”

Stuart Fortey Director at Centregreat Rail said: “The Centregreat Rail team has always been pleased to support communities, assisting community groups and charities, especially those local to our projects, providing a positive legacy upon completion of our works. Following our time on site successfully refurbishing Kidwelly Viaduct, we were therefore delighted to have the opportunity to work alongside volunteers from both Transport for Wales and the Kidwelly Scouts Group to supply materials and labour for construction of the new platform planters.”

Social Value Manager, Nathan Ball, added “Centregreat Rail values the importance of the opportunities we are afforded to maximise social, economic and environmental benefits for the communities within which we work. This engagement is an excellent example of boosting environmental and ecological impact through creation of green space, which not only supports biodiversity in a built environment, but also creates a station environment which elevates wellbeing for the travelling public. Provision of construction experience, such as for the Kidwelly Scout Group, is also something we are passionate about, inspiring the next generation, addressing the skills gap and projecting a positive image of the construction industry.”

Shân Cheesman, Kidwelly Scout Leader said: “We’d like to thank Transport for Wales for the opportunity to transform the station and our young volunteers are looking forward to the spring to see what species we’ve attracted.”

The station has received the enhancements as part of Transport for Wales’ Green Routes project. The project introduced green features at 25 of our stations and in five community areas aiming to boost local biodiversity and increase people’s well-being across the network.

Transport for Wales was awarded £100,000 from the Welsh Government’s Local Places for Nature scheme and the National Lottery Heritage Fund to enhance local biodiversity at and near its railway stations.