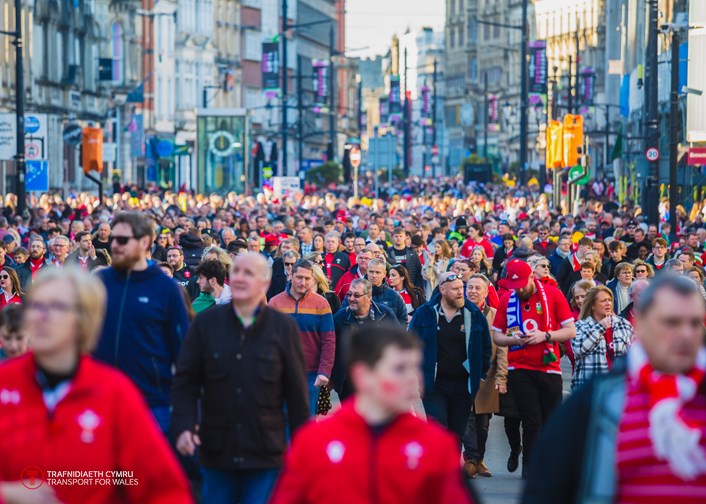 TfW and the WRU have worked together to provide a number of options for rugby supporters unable to travel to the Welsh capital by train due to the impact of national industrial action. TfW is not involved in the dispute but the industrial action resulting from the dispute between the RMT and Network Rail means it will be unable to operate rail services on Network Rail infrastructure.

As a result, there is a severely reduced rail service from the South Wales Valleys and Newport before the match and no rail service from Cardiff after the game, and therefore people should not travel by train.

TfW will provide services from Abercynon Railway Station car park and Pontypridd Railway Station (front of station) at 11am and 11.30am on Saturday 5 November, with return coaches available at 6pm and 6.30pm after the match.

Coaches will drop off and depart from the Civic Centre (Cardiff King Edward VII Avenue) in Cardiff city centre, a short walk from the Principality Stadium.

Return coach tickets must be booked in advance. Existing rail tickets are not valid for coach travel.  Capacity is limited and tickets will be issued on first come, first served basis.

Coaches can be booked here www.tfw.wales/places/events/wales-v-new-zealand

If you’re not travelling with TfW, a separate coach service will be available. The WRU has partnered with Big Green Coach, the largest events travel company in the UK, to put on special coach services for supporters travelling into Cardiff on Saturday 5th November for the Wales v New Zealand match at Principality Stadium.

Return coach travel is available from 15 locations across Wales and major cities in England including Birmingham, Reading and London, direct to Cardiff’s city centre.  Return coach seats start from £28, and all coaches are timetabled to arrive in plenty of time before the game and will take fans home again, after full time.

Tickets can be purchased online via: https://www.biggreencoach.co.uk/events/wales-v-new-zealand-coach-travel-to-principality-stadium-cardiff

Big Green Coach is fully committed to protecting the environment and will offset all the carbon produced for these coach services - making the Big Green Coach network to the rugby carbon neutral.

Secure indoor cycle storage for up to 50 bikes is now available at The Bike Lock on Windsor Place in Cardiff city centre. Visit www.thebikelock.co.uk for more information.

Transport for Wales will be providing an extremely limited rail replacement bus service from Cardiff Central to Radyr post-match in addition to the coach offer.

Sales of the Transport for Wales return coach tickets will close at 4.15pm on Saturday 5 November.

Jan Chaudhry-Van der Velde, Transport for Wales, Chief Operations Officer said: “Industrial Action will severely impact rail services over the weekend, so please do not travel by rail to the game.  TfW is not involved in the dispute but we are unable to operate our services.  However, we have worked closely with our partners in Cardiff Council and the WRU and are pleased to be able to offer extra coach services that will help people move in and out of Cardiff.”

Mark Williams Principality Stadium Manager says: “Since we were made aware of the industrial action, we have been working closely with our partners at Cardiff Council, Transport for Wales, and Welsh Government to ensure this fixture remains accessible and a number of measures have been introduced to help supporters. A Wales home fixture against New Zealand at Principality Stadium is always a fantastic experience, and we are looking forward to welcoming another magnificent occasion at the opening match of the Autumn Nations Series, but we also urge supporters to allow plenty of time to get into the city and plan their journeys in advance.”

Big Green Coach Director Danny Newby says: “We are delighted to be in a position to assist the WRU get fans to the game during the rail strike. We appreciate that getting to the game can be stressful, especially with train not being an option, so we have organised a large number of coaches and we look forward to welcoming the fantastic fans onboard.”